Unfortunately, something went wrong.
Show all in Schwalbe is part of the exhibition ‘Plastik. Remaking our world’ at the Vitra Design Museum

SCHWALBE IS PART OF THE EXHIBITION ‘PLASTIK. REMAKING OUR WORLD’ AT THE VITRA DESIGN MUSEUM

Schwalbe is part of the exhibition ‘Plastik. Remaking our world’ at the Vitra Design Museum

Schwalbe is represented with several exhibits in the current exhibition at the famous Vitra Design Museum in Weil am Rhein, Germany. In ‘Plastic. Remaking our world’, Schwalbe's successful tube recycling program is among the exhibits on display. The exhibition, which opened on Friday (March 25th), takes as its theme the plastics boom, and how plastic shapes our everyday lives like almost no other material: from packaging to sneakers, from household appliances to furniture, from cars to architecture. The exhibition examines the rapid rise of plastics in the 20th century, their devastating consequences for the environment, and possible solutions for more sustainable use. 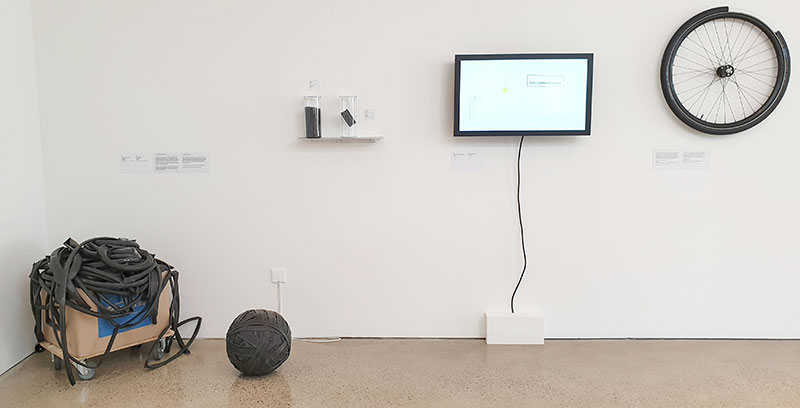 Schwalbe has found one of these solutions with its tube recycling program for old, used bicycle tubes, which was launched back in 2015. The circular economy is thus firmly anchored in the family-owned company. The program is now already available in five European countries (Germany, the Netherlands, Belgium, Great Britain, Switzerland), with old inner tubes being collected, recycled and then used to produce new ones. The process provides an 80 percent energy saving compared to the production of new butyl. More than six million tubes have already been collected and recycled since the project was launched. The successful concept is also to be applied to bicycle tires in the future. Schwalbe launched a pilot project for this in November 2021 in cooperation with the Technical University of Cologne and Pyrum Innovations AG.

In the Vitra Design Museum Gallery, you can now see a ball made from used bicycle inner tubes, cut-off valves and shredded inner tubes – the various preliminary stages of inner tube recycling. A video explains the recycling cycle at Schwalbe – beginning at the return of the used tube to the dealer, ending with the new tube. In addition, the gallery shows the cut-away model of one of the most popular and best-known Schwalbe tires, the Marathon Plus. This is intended to illustrate the construction of a tire and to suggest the much greater complexity of tire recycling compared to inner tube recycling.

Other exhibits in the museum include rarities from the early days of plastics, spectacular objects from the pop era, as well as numerous current designs and projects, including pragmatic innovations, projects to clean up the world's oceans, and bioplastics based on algae or fungal cells. The exhibition can be visited in Weil am Rhein until 04 September 2022. It will then travel to other renowned museums, including, for example, the V&A Dundee Museum, where it will be presented from 29 October 2022 to 5 February 2023, and from spring 2023 to the maat - Museum of Art, Architecture and Technology in Lisbon. Further stops are being planned.