When Erwin Sikkens* came across a 40-year-old document in his grandmother's house, it was immediately clear to him: he had to do it.

It was immediately clear to him: he had to get on his bike. He had found the original stamp card of the 5th International Moselle Bike Tour of September 20, 1981, organized by the RV Schwalbe Trier 1932 e.V.

The tour - starting in the village of Ehrang and covering 115 kilometers through the Moselle valley - was completed by his entire family on racing bikes: grandma, grandpa, his parents. And they are the reason why the Dutchman himself has become a passionate cyclist and gravel adventurer. So, he used the historical find as a template to ride the route himself as a Gravel Tribute – not exactly the original route from back then, but his very own version of the Moselle bike tour, which of course would not have been possible with the racing bikes of the time. But Erwin Sikkens has integrated some crucial waypoints of the original route, so that the spirit of the route of that time is maintained. 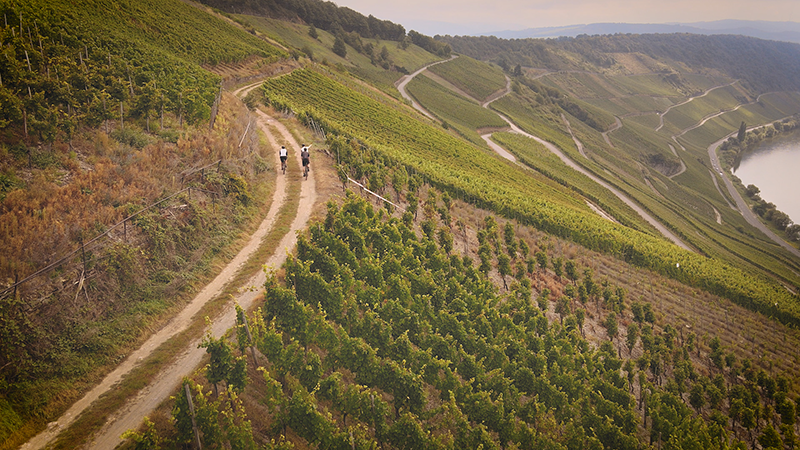 "The story started as a found object in my grandmother's closet and has now become an inspiration for a great gravel tour. At the same time, it's also a tribute to my sporty and bike-crazy family, who rode such a tour back in the 80s on steel bikes and in wool jerseys. For me, this underlines the timeless spirit of cycling," Sikkens says.

Together with two friends Sikkens set off on the Gravel Tribute Tour on September 20, 2021 – exactly 40 years later. After the start near Trier, the Moselle was the signpost – but very quickly the route went up into the vineyards and onto gravel roads. With the best weather conditions, the three were rewarded with unique views of the river valley on every climb. Halfway along the route, Sikkens and his companions left the Moselle behind them and turned left in a northwesterly direction – just like the original route from 1981. On the way back, a new world of fields and especially forests awaited as a contrast – and a well-deserved break at the Minheim refuge. The tour finally returned to Trier to the starting point, in the end 113 kilometers with around 2,000 meters of altitude had been completed.

Schwalbe not only accompanied the entire tour, but also visited Erwin and his grandmother at home.

*Erwin Sikkens is a Dutch cyclist who has been taking cycling fans on his adventures for many years. In addition to an Instagram account, the 34-year-old maintains a very successful Dutch cycling adventure blog.